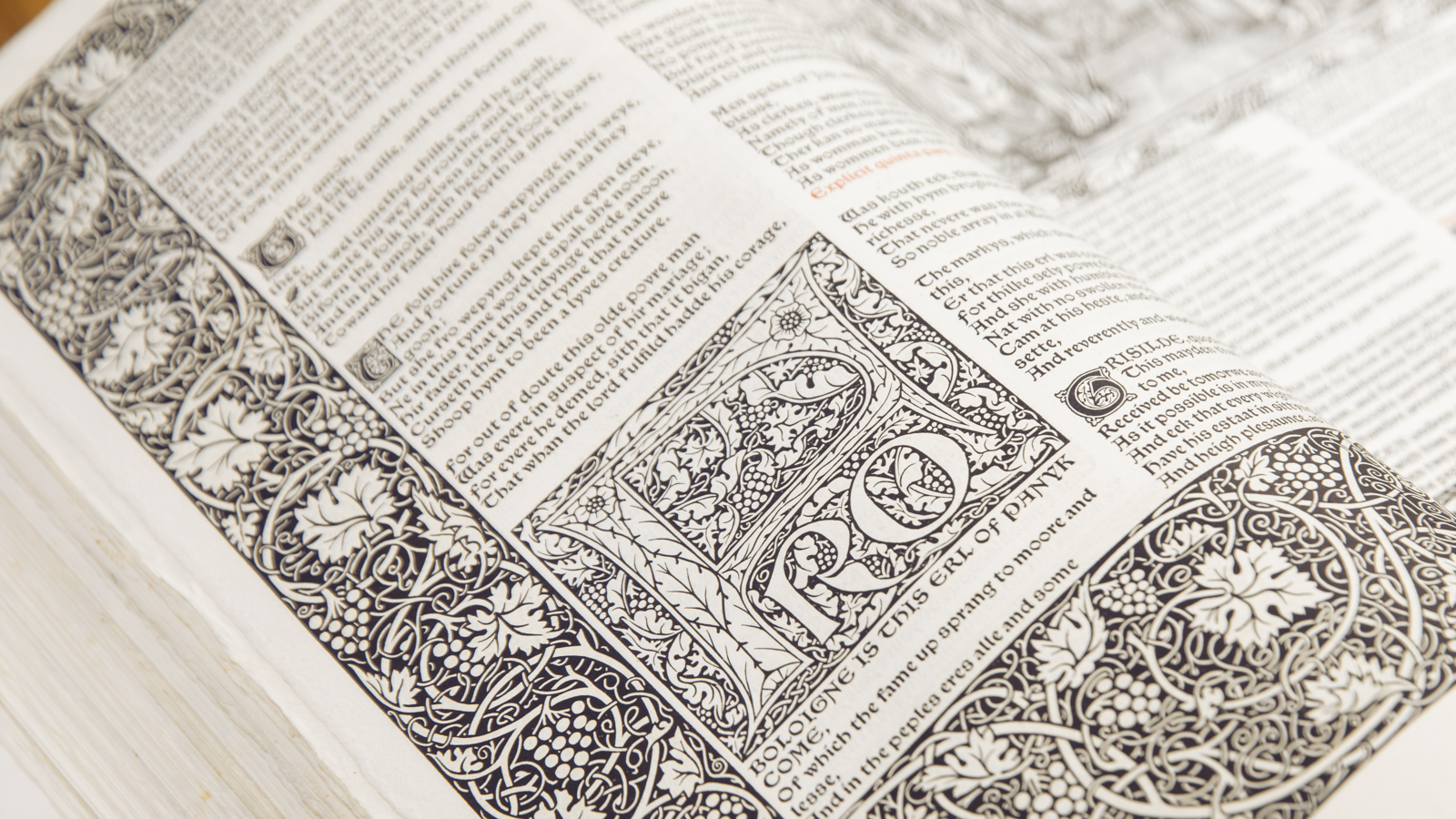 The UNT Special Collections has acquired a landmark of fine printing and masterpiece of Victorian design, a copy of the Works of Chaucer printed by William Morris at the Kelmscott Press in 1896.

William Morris, internationally known for his textile, wallpaper, furniture, and stained glass designs, was a champion of the British Arts and Crafts movement, and promoted a return to the medieval aesthetic and per-industrial production methods, where fine handwork created beautiful items that would bring pleasure to their owners. He founded the Kelmscott Press in 1891, and the press produced 53 titles during the 8 years it was in existence – it outlived Morris by two years.

Morris’s Chaucer was a perfect showcase for his art and production philosophy. Often called “the most beautiful printed book in the world”, the Works of Chaucer was the greatest production of what is considered one of the most important fine/private presses in the world. The pages are illustrated with 81 original woodcuts designed by the important Victorian painter and member of the Pre-Raphaelite movement Edward Burne-Jones, engraved by William Harcourt Hooper, and are further enhanced by ornate woodcut initials. These woodcuts and the Chaucer type, one of three fonts designed by William Morris for the press, are printed in a deep, rich black with accented headings and notes in red. The volume is an example of the highest example of fine press craftsmanship.
The text of the work is a collection of the works of Geoffrey Chaucer, including not only his most famous works, the Canterbury Tales, but many less well-known poems.

An expensive undertaking at the time, 425 copies were printed on hand-made paper and offered for sale at the time for £20 each (about $3,457 in today’s money), and 13 copies were printed on vellum and sold for £126 each (about $21,890 in today’s money). Most were bound by the press in blue paper-covered boards with a cream linen spine having an applied printed spine label, and 48 were specially bound in white pigskin with silver clasps. As a physical item, not only is it an example of quality, but this particular copy has several features that help deepen our understanding of bibliography and the history of the book. Inside the front cover are two bookplates, one for Robert Heysham Sayre, of South Bethlehem, Penn. The personalized exlibris shows a train and stack of fine books – reflecting his life as a civil engineer and railroad executive. The second, a book label is that of George Abrams, brother of the well-known publisher Harry N. Abrams, and himself an artist and type designer, bibliophile, and authority on Venetian incunabula. We also know that it appeared at auction in 2021.

This magnificent treasure may be one of the best “regular” copies to change hands in decades. It is in almost perfect condition, as if it had just left the premises of The Kelmscott Press, and even includes a “spare” spine label inside the back cover. In 126 years it has traveled from a printing press in England to a collector in Pennsylvania, to a collector in New York, and has now come to Texas, to grace the collections of UNT, and to inspire and support the education of our students and researchers for generations to come.