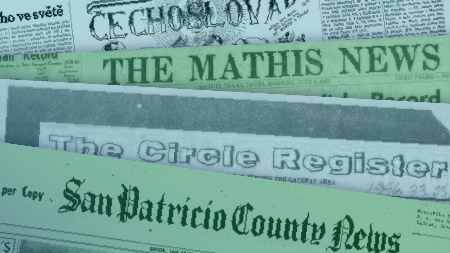 Posted: 08/27/2021
Digital Newspaper Unit
In the News Honors and Awards

UNT Libraries are pleased to announce that the National Endowment for the Humanities has selected us for a sixth, two-year cycle of the National Digital Newspaper Program (NDNP), to digitize Texas newspapers on the Library of Congress’ Chronicling America website.

For Texas, participation in NDNP has offered an unprecedented opportunity to represent the state on a national level, through its newspaper publishing history.

This award is for $208,888 and will build access to an additional 100,000 pages of Texas newspapers on Chronicling America, to spotlight community identity in Texas. For this round, we are looking to digitize further years of El Paso and San Antonio titles, with the goal of expanding their availability up to and beyond 1925, depending on the choices of the Texas advisory board. Both El Paso and San Antonio saw significant changes in the civil rights conversation, even while the U.S. underwent recovery from WWI, experienced the Great Depression, and fought in WWII. These cities were significant population centers where voices of diverse groups amplified to navigate an increasingly globalized world.

Chronicling America is a partnership between the National Endowment for the Humanities and the Library of Congress in an effort to build a nationwide, open-access repository of digitized historic newspapers.

To learn more about Chronicling America, the National Endowment for the Humanities and the Library of Congress, visit their social media sites!