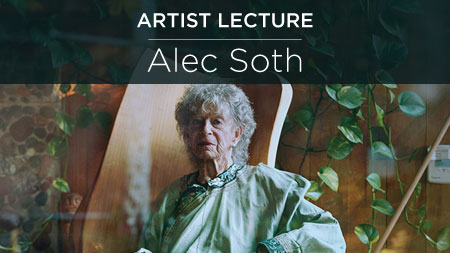 Alec Soth (b. 1969) is a photographer born and based in Minneapolis, Minnesota. He has published over twenty-five books including Sleeping by the Mississippi (2004), NIAGARA (2006), Broken Manual (2010), Songbook (2015) and I Know How Furiously Your Heart is Beating (2019). Soth has had over fifty solo exhibitions including survey shows organized by Jeu de Paume in Paris (2008), the Walker Art Center in Minnesota (2010) and Media Space in London (2015). Soth has been the recipient of numerous fellowships and awards, including the Guggenheim Fellowship (2013). In 2008, Soth created Little Brown Mushroom, a multi-media enterprise focused on visual storytelling. Soth is represented by Sean Kelly in New York, Weinstein Hammons Gallery in Minneapolis, Fraenkel Gallery in San Francisco, Loock Galerie in Berlin, and is a member of Magnum Photos.

Presented jointly by the UNT Libraries and CVAD Photography Area. Made possible by The Cathy Nelson Hartman Portal to Texas History Endowment.