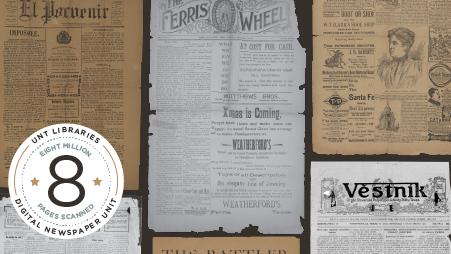 Posted: 11/18/2020
Digital Libraries
In the News Collection Highlight About the Libraries

The Texas Digital Newspaper Program on The Portal to Texas History has reached 8 million newspaper pages!

Many newspaper titles in this set of 1 million pages paralleled each other in date, representing the year 1940, from across different parts of Texas.

The beginning of World War II is revealed through headlines in these newspapers. The Cleburne Times-Review offers a headline-synopsis of historical events, with its earliest 1940 headline reading, “U.S. Protests British Seizing Mail,” and with the latest 1940 headline stating, “U.S. Warned to Avoid Hostility with Europe.” The Cleburne Times-Review was a daily newspaper, and as is characteristic of daily newspapers from this period, they invested heavily in wire service coverage of the war overseas.

A weekly newspaper, El Democrata represents the same time period in 1940, published in San Diego, Texas. The January 19, 1940, headline article titled, “La Justicia Para Los Cuarentones,” details the problems of layoffs amongst people in their 40s due to technological modernization and a lack of more recent training for people who have been working since their late teens and early 20s. The article elaborates on the need to solve the problem because people’s lifespans were increasing, even while their employment options were decreasing. This heavily represents the depression-era quandary many people found themselves in as they handled unemployment in the midst of a terrible economy.

Another weekly newspaper, The McKinney Examiner, strikes a serious but optimistic note in its January 4, 1940 issue. This issue discusses March of Dimes donations, raising of defense taxes from the federal government, and FDR’s new year cheer. Notable in this issue is that it combines national news pieces with hyper-local information, such as an area murder trial of a man convicted of killing a “City Motorcycle Officer.” Included below the fold, however, is a mention about the Finnish military fighting Russia, which by January 1940, was in a non-aggression pact with Germany and preparing to divide up Poland.

The above items just represent one small set of newspapers that allow us to peer into the window of history, to understand how people were dealing with the world at different points in time.

Other fun factoids in this most recent set of 1 million newspaper pages are:

Eight million pages of newspapers represents a lot of Texas, U.S., and world history, unlocked through easy navigation and full-text searching on The Portal to Texas History. We thank all of our generous partners and grant funders for their contributions to making this newspaper collection freely accessible to the world.

If you would like to learn more about partnering with us, please visit the Texas Digital Newspaper Program!