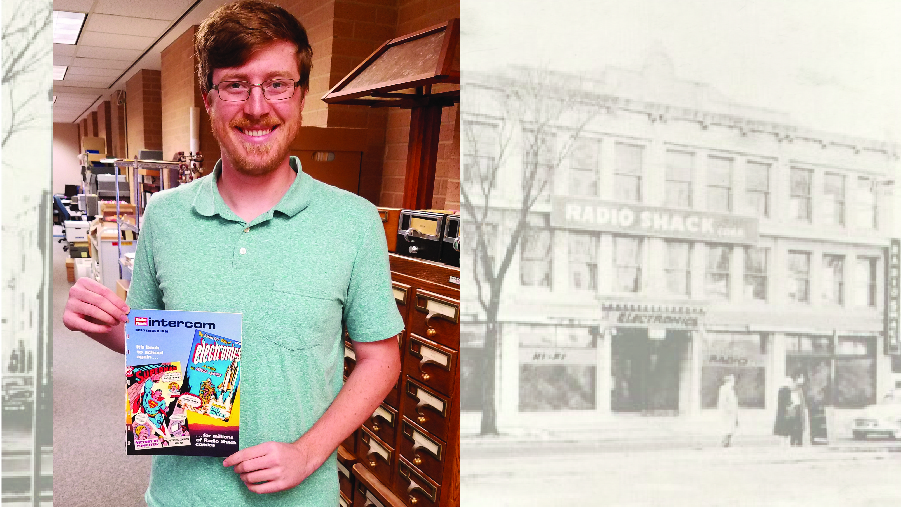 The University of North Texas Special Collections acquired the Radio Shack and Tandy Corporation Archive through the 2017 bankruptcy auction of the Radio Shack Company. Although this is an unusual way for UNT to acquire a collection, it was a once in a lifetime opportunity to preserve an important piece of technology, computing and north Texas history.

In 1975, the company broke ground on Tandy Center in Fort Worth. The twin multi-story towers became an iconic part of the downtown Fort Worth landscape. The Tandy Center also included a mall, an indoor ice-skating rink and a privately owned subway running from the Tandy Center to the parking lots. The Tandy Corporation became the RadioShack Corporation in 2000, and a year later they sold Tandy Center. After filing for bankruptcy in 2015, Radio Shack was sold to Standard General.

The Radio Shack and Tandy Corporation Collection holds many interesting artifacts and documents from the company’s history. Some of these include:

The decline and bankruptcy of Radio Shack has been newsworthy story in recent years. Radio Shack had historically been a reliable source of products for both tech-savvy consumers and hobbyists. This collection will hold interest for anyone wanting to see the growth, structure, and inner workings of this tech giant.

The finding aid for the Radio Shack and Tandy Corporation Archive is available online. Some items from the archive are featured in an online exhibit. To learn more about the Radio Shack Archive, or to access materials on-campus, please contact specialcollections@unt.edu.

This collection was processed as a practicum project by Cody Rone (featured image), a graduate student at the University of Texas at Arlington.