Image From The Portal To Texas History Featured In Mural 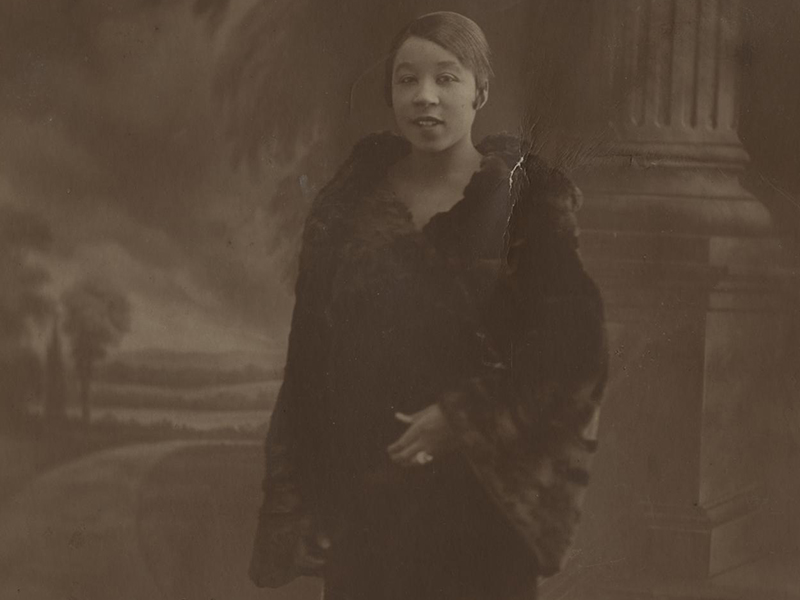 The Portal to Texas History has left its mark on a new mural in downtown Dallas.

Wells Fargo & Company unveiled the latest addition to their Community Mural program on October 28 with a mural at their branch on the 2000 block of Greenville Avenue. The mural features images of the Hockaday School, the Arcadia Theater, Fair Park and the Dallas train depot. Pictures of local residents also overlay the mural’s background – a reconstruction of what that early Greenville block looked like.

One of those local residents is the subject of a Rescuing Texas History photo from The Portal To Texas History: a portrait of a young woman wearing a dark fur dress and standing in front of a painted backdrop. Wells Fargo obtained the image with permission from The Private Collection of TB Willis, one of The Portal to Texas History’s partners. TB Willis purchased the photo and a collection of photographs of African Americans from an estate in Dallas, Texas.

In addition to the collection of African-American photographs, The Private Collection of TB Willis consists of historical photographs of World War I military training base Camp MacArthur, church photos, buildings across Texas and family photo albums that include Willis family members and extended relatives who settled in Waco, Texas in the 19th century.

Wells Fargo contacted the Portal to Texas History for permission to use the photo in their mural on Lower Greenville. Because The Portal does not own any of the images it provides, Mr. Willis himself granted permission for the photo to be used.

The latest mural on Lower Greenville can be seen at Wells Fargo Bank at 1931 Greenville Avenue, Dallas, TX 75206.