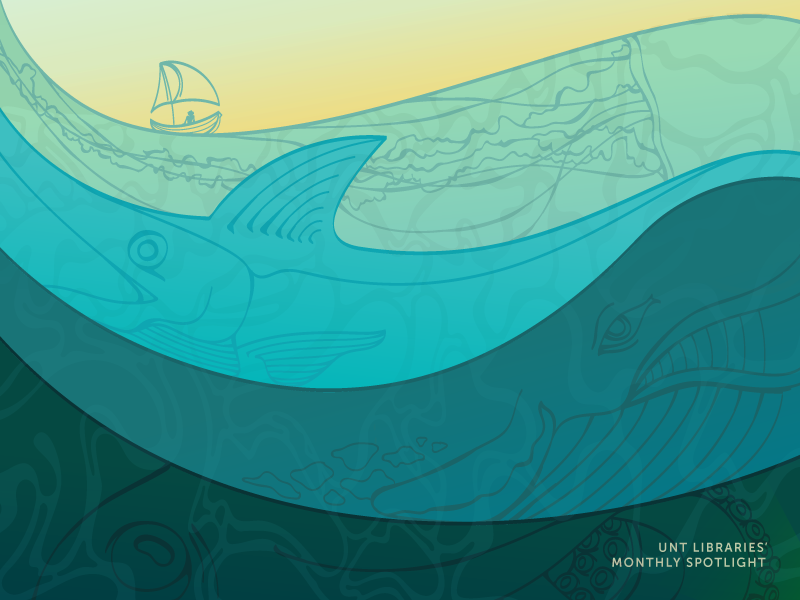 In a word: it’s too hot this summer.

The best solution is to wade in a pool all day. Since we all have jobs or things to do, the next best solution is to talk about water long enough until you naturally cool off. Since World Ocean Day came and went in early June, we at UNT Libraries considered this a great time to dive into (get it?) our vast resources on the oceans around our little world.

Surprisingly, we learned a few things about these massive seas that piqued our interest in mysterious legends, connected the dots to books we love and answered the most burning question of all: why is it so hot in D-FW?

How the oceans affect you 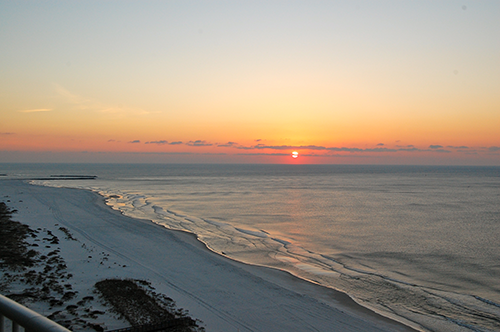 You might be wondering: why even worry about the oceans? After all, the nearest sea to us here in Denton – the Gulf of Mexico – is 330 miles away. And oceans? Pfft. The Atlantic coast is about 1,000 miles away and it’d take you 20 hours to drive to the Pacific coast.

And yet, the oceans affect us every day. Specifically the Gulf Coast, which offers a streaming service that you might consider canceling every once and a while if you could

The Gulf Stream is a rapid, strong ocean current that originates in the Gulf of Mexico and flows out into the Atlantic where it affects the weather from the United Kingdom on down to West Africa. Ireland and England should be much colder than they are, but our little Gulf of Mexico makes them quite habitable! And, as you can imagine, our close proximity to it keeps Texas pretty warm as well.

Unfortunately, it also makes living here a little dangerous. NASA points out that tropical cyclones (i.e., hurricanes) “are like giant engines that use warm, moist air for fuel.” So that nice little pocket of warm, damp air in the Gulf that essentially makes much of Northern Europe a nice place to live? It also serves as a death engine for us living here next to it. Fantastic.

One might think moving north, away from the ocean, keeps us safer. Well … not exactly. The Dallas-Fort Worth metroplex we call home rests in “Tornado Alley,” which exists because of the Gulf of Mexico hundreds of miles to the south. This graphic does an excellent job explaining why we’re in such a pressure-cooker: 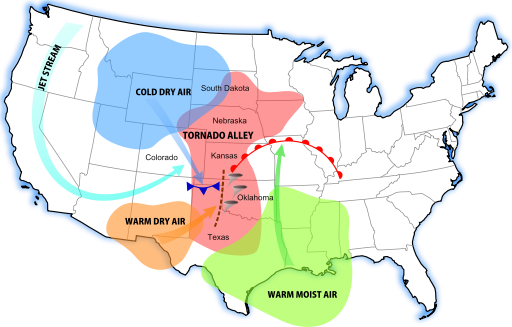 That massive sea to the south of us sends massive amounts of humid air north, which would be fine if our Canadian friends didn’t send cold winds south at the same time during the winter. When these two winds collide, they create thunderstorms. And it just so happens the D-FW area is right in the crossfire.

So next Spring, when thunderstorms bring a local tree down on a power line and you’re stuck without Facebook for a few hours, make sure to shake your fist southward at the sea.

Hate the weather here? Blame the sea. Or read more about the sea’s effects here at UNT Libraries, whether it’s Dudley Lynch’s excellent collection of Texas tornado stories or Erik Larson’s acclaimed book about the man who failed to prevent the deadliest hurricane in American history in Galveston

If you were wondering, the National Weather Service predicts a “near-normal season” is the most likely scenario as hurricane season (which began in June) continues through November. They also mention “considerable uncertainty” about a weak El Nino this year, so who knows. We’re all just pawns in Mother Nature’s game, right? 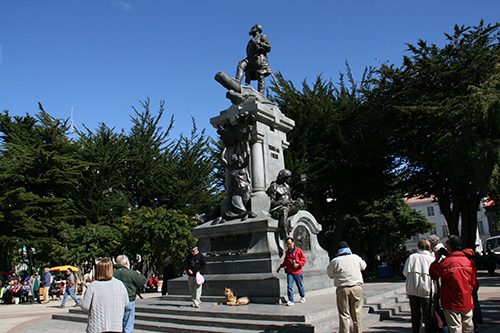 The Atlantic Ocean’s name, as you might expect, comes from Ancient Greece. The name refers to the Titan in Greek Mythology, Atlas, who held the heavens on his shoulders. The historian Herodotus referred to the ocean as Atlantis Thalassa (Sea of Atlantis) in 450 BC.

The Pacific Ocean went by Mar del Sur (Sea of the South) when Spanish explorer Vasco Nunez de Balboa discovered it in 1513 but later took on the name “Pacific” when Ferdinand Magellan – pictured above, in fancy statue form at Cape Horn in Argentina – named it Pacifico (“peaceful”) during his famous circumnavigation in 1519.

Because it surrounds the Arctic, the Arctic Ocean’s nomenclature is pretty obvious. But where does “Arctic” come from? You guessed it: the Greeks. Oxford Dictionaries explains:

Arctic conceals its origins rather more successfully; it comes from the Greek arktos, meaning ‘bear’ – and also ‘Ursa Major’ and ‘pole star’. The connection between bear and star comes from the story in Greek mythology that the nymph Callisto was turned into a bear and placed as a constellation in the heavens by Zeus.

On the other end of the sneaky origin spectrum, the Indian Ocean is named as such because it borders India. 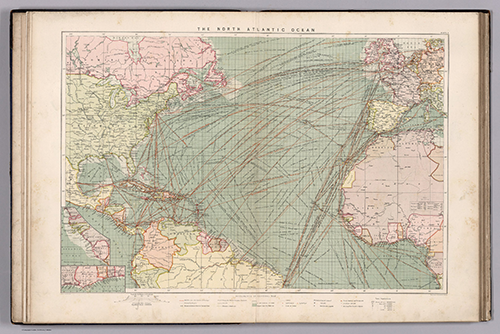 If you’re a history nerd like many of us here at UNT Libraries, then you’ve probably come across some really strange maps during your Wikipedia wormhole plummets. Reading about the European discovery of the New World is one thing, but sifting through the speculative maps they made is another adventure entirely.

With such limited information about the Americas, whose existence was a new concept to cartographers that had previously believed the Atlantic Ocean stretched from Europe to Asia, it’s no wonder so many ocean maps from hundreds of years ago look wonky. UNT Libraries provides access to the David Rumsey Historical Map Collection, a database with over 67,000 maps created throughout world history.

Many of them offer unique glimpses at the early guesswork involved with imagining the new scope of the Pacific and Atlantic Oceans. In 1529: Was the Pacific Ocean a diagonal mass slicing toward South America? In 1704: It turns out the answer is no, but surely the Atlantic Ocean is super-narrow between South America and Africa!

Ironically map in 1709 entitled “A New And Correct Map Of The World” shows a gulf of water between California and North America, the Pacific Ocean twice as large as it is and the Indian Ocean as only slightly larger than the Gulf of Mexico.

Hundreds of years ago, it was simply impossible for people to grasp just how large our world and its oceans actually was. We have more than a few books at UNT Libraries that document the surprisingly dramatic races to correctly map the oceans. 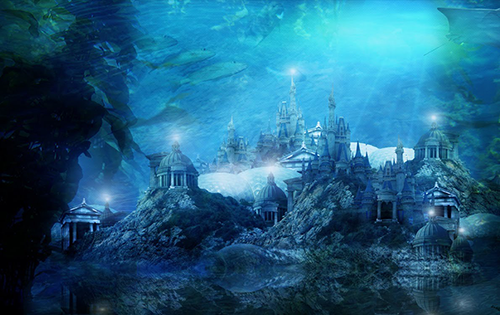 Ah, the fun part. We’ve talked so much about the real science and history behind our world oceans so far. It’s time to get down to some of our favorite myths surrounding them.

And there are a ton, as you might expect: we’ve explored only five percent of the Earth’s oceans to this day. That leaves a lot of mysteries to be solved, and legends have popped up about the unknowable deeps throughout the ages.

Some of the most famous of these involve islands! You’ve heard of Atlantis, the mythical great island society wiped out by a flood in one of Plato’s stories. UNT Libraries has plenty of resources on Atlantis that you can use to solve the mystery yourself! There’s also Avalon, the mythical island resting place of King Arthur and the Fortunate Isles in the Atlantic Ocean, where Greek heroes were said to be buried.

Finally, there are the sea monsters that range from legends to actual reported sightings. (No, Moby Dick doesn’t count.)