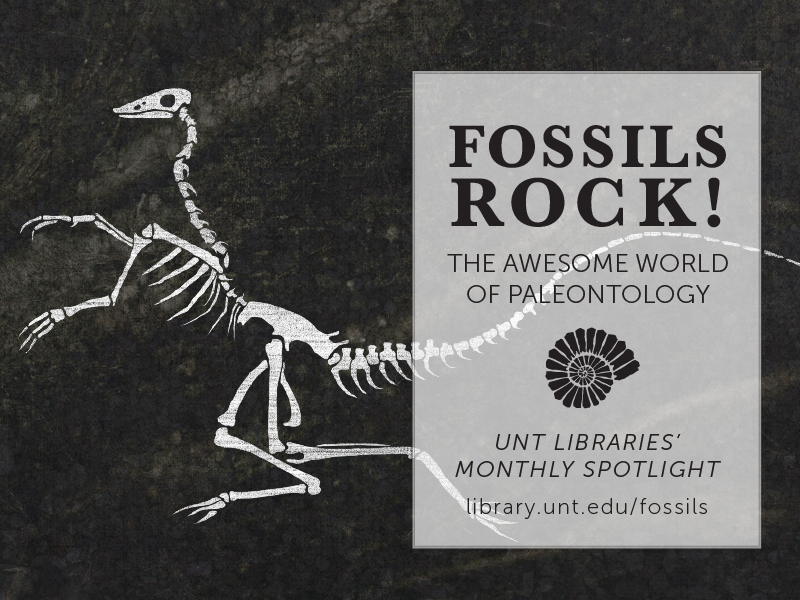 The first week of October is upon us, and so is National Fossil Day.

The National Park Service and the American Geosciences Institute host the National Fossil Day festivities each year, and that inspired us to dive into our UNT Libraries bookshelves to find out what kind of fossilized, dino-riffic resources we have available.

Lots, as it turns out! So join us as we dive into some rocks, bones, and books.

Fossils – What Are They?

What defines a fossil? Look no further than its name: fossilis is Latin for “obtained by digging.” As the eons pass, things die. As living things died out, they become preserved through some hard-to-pronounce ways such as:

And so on. But for simplicity’s sake, we’ll say that things die, a lot of dirt falls on them, and they get preserved for paleontologists to dig up thousands of years later. And we mean thousands upon thousands.

Consider that recorded human history only dates as far back as six thousand years ago. Humans, as they appear today, didn’t evolve until 200,000 years ago. Meanwhile, estimates for the earliest life on earth range anywhere from 3.77 to 4.5 billion years ago.

That’s quite a gap, and fossils are the key to filling it in. Ever since Charles Darwin introduced evolution to the world, paleontology has worked to explain it.

So what kinds of formerly living things can become fossils? We know dinosaurs can, but that’s just one example. Luckily you don’t have to be a giant thing to get stuck in a rock for millions of years. As Helmut Mayr’s handy guide points out, anything from small birds to insects has been found fossilized by paleontologists. The fossils that require microscopes to study are some of the most important finds because they help paleontologists study changes in the Earth’s climate over millions of years.

So next time you use hand sanitizer know you’ve made a future paleontologist cry.

As you know from movies such as “Jurassic Park” and “The Land Before Time,” we were not always the top species on the planet. For about 177 million years, these wondrous and mysterious beasts roamed the supercontinent of Pangea.

Books like “The Historical Atlas of The Earth” offer a good sense of what their world was like back then. Think Houston, but everywhere: the 45th parallel – around the United States-Canada border today – felt as humid, muggy and warm as a summer morning in Galveston. The North Pole was green with vegetation.

And then everything died. More on that in a second.

Fans of “Jurassic Park” will be pleased to learn that some of the dinosaurs featured in those films likely roamed right here in North Texas. According to “Dinosaurs of the Southwest,” the fossils of “carnivorous dinosaurs are reported to be more common in Cretaceous strata in New Mexico, Colorado, Texas, and Utah than in beds of the same age in the northern regions of the United States.” The author, Ronald Paul Ratkevich, tells a particularly stirring tale of local paleontology:

“One particularly interesting discovery was made at Glen Rose, Texas. In lower Cretaceous limestone, representing an ancient beach, the tracks of a great sauropod could be seen making their way across the mud. Superimposed on these are the footprints of a large carnosaur clearly on the hunt. When the sauropod tracks turn to one direction, so do those of the carnosaur; its own clawed feet stepping directly onto the deeper prints of its prey.”

Glen Rose is an hour and a half away from Denton.

The Atlantic published a fascinating article recently about the ongoing debate over the fate of the dinosaurs in the scientific community. The dinosaurs all died out 66 million years ago during the Cretaceous-Paleogene (K-Pg) extinction event, which claimed the life of three-quarters of the Earth’s biosphere.

(In case you were wondering, no, that isn’t the worst extinction event in our planet’s history. That would be the Permian-Triassic extinction event, also known as “The Great Dying,” that killed off 96 percent of marine species and 70 percent of land animals. Even insects died en masse. Gulp.)

We thought we solved the mystery of dinosaur death in 1980 when scientists discovered evidence supporting the theory a massive asteroid struck the Yucatan Peninsula and caused the K-Pg extinction. Many books about this solution are in UNT Libraries, including some written shortly after the discovery and years beyond.

However, as the article in The Atlantic points out, the asteroid theory is coming under renewed scrutiny. And that’s a good thing: science’s role is to keep asking questions and looking at the evidence. That’s where fossils still play a huge role.

Meanwhile, our research for this article seriously heightened our interest in extinctions beyond that of the dinosaurs. In the process, we discovered dozens of fascinating books written in the past 20 years about the subject, from the Ice Age animals to the importance of fossils in understanding extinctions to the extinctions humans could cause and are causing. Here’s just a few:

Perhaps we should be grateful for the death of the dinosaurs since it more or less led to the rise of humanity. And author Jan Zalasiewicz asks a fascinating question in the title of her book The Earth After Us: What Legacy Will Humans Leave in the Rocks? Someday our species will be fossils, too!

Where can I do fossil-hunting of my own?

Ah, the age-old question first posed to us by Star Wars: Where’d you dig up that old fossil?

Any kid who got to go on a “dig” field trip in elementary school loved it. The good news is that option is still available to you! We already mentioned Glen Rose, home of the Dinosaur Valley State Park. The Ladonia Fossil Park holds cretaceous fossils as well as remains of more recent animals like sharks and mammoths. Just up the road, in Sherman, you can park off Travis Street and find fossilized shells at Post Oak Creek.

Finally, the fossil park in Mineral Wells lets you bring fossils you find back home with you, the dream of anyone who watched “Jurassic Park” and thought that was a good idea.