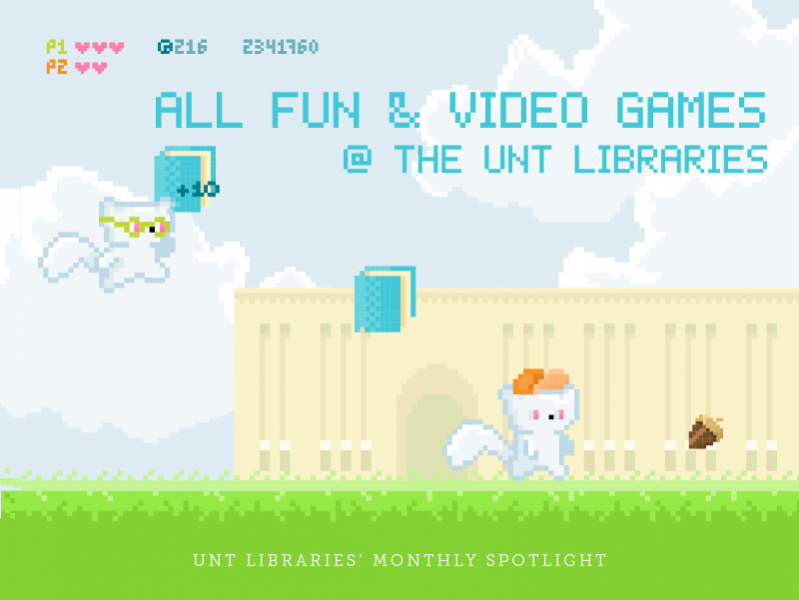 Yes, that sentence sounds a little anachronistic. Libraries and video games? Who runs this place, dogs and cats? (Ed. note: We wish.)

The truth is you’ll be hard-pressed to find a more well-rounded collection of gaming-related resources than here at UNT Libraries. Our Media Library hosts a plethora of classic and new titles to play for yourself, but the sheer range of video game books across our libraries may surprise you. Whether you want to learn how to create games, learn how the industry works or study the psychological and sociological effects of gaming, UNT Libraries has a book for you. Gaming is for everyone, the saying goes and nowhere is that more accurate than at UNT Libraries. Let’s explore just a fraction of your options! If we don’t touch on something you like, searching for video games in our catalog is easy: just follow this link and browse to your heart’s delight.

Yep. We’ve brought out the big guns first. One of (if not the) most critically acclaimed games of the year is yours to borrow from UNT Libraries. If you’re a fan of Norse mythology, action games, elaborate stories about father-son relationships and large axes, then we can’t recommend this title enough.

Released in 2012 by a tiny studio in California, Journey features a simple premise with profound emotional experiences. You play as a robed figure traversing an immense desert toward the peak of a distant mountain. Journey earned a Grammy nomination, numerous awards and is generally considered one of the greatest games of all time. It’s not time-consuming, though! You can complete Journey in one sitting.

Combine soccer and Hot Wheels toys, and you get this surprise hit video game. Rocket League is the perfect competitive game to wind down with after a long day of classes and studying, and it’s a great one to play with your roommates.

How Games Are Made

Billed as a collection of “the triumphant, turbulent stories behind how video games are made,” this book by Kotaku writer Jason Schreier is a must-read for any fans of the gaming medium. Schreier’s in-depth reporting shows just how grueling it was to create some of your favorite games, from successes (like Destiny, The Witcher 3 and Dragon Age: Inquisition), infamous failures (Star Wars 1313) and many, many more.

Much like game culture itself, game development is usually considered a dominion for men. At least, it was: the last ten years have shown that games are for everyone and have been for everyone all along. But the development of games has not quite opened doors so readily to women, who suffer through harassment, dead-end careers, and minimization to this day. Veteran game designer Jennifer Brandes Hepler gives the women of game development a voice and hope in this remarkable book.

How Games are Written

A Mind Forever Voyaging: A History of Storytelling in Video Games

Moral gaming in Ultima IV. The rise of cutscenes in Metal Gear Solid. The expensive interactive cinema of Heavy Rain and indie-budget minimalism of Dear Esther. Dylan Holmes traces the evolution of narrative technique in video games from the early 80’s to the present day in A Mind Forever Voyaging, a book that “captures the best that video games have to offer.”

Hey, look, another outstanding book by Jennifer Brandes Hepler! She and three other experienced narrative game designers joined together in 2015 to create this essential text for any writers considering a career in the video games industry. The Toolbox is full of exercises, as well.

Crash Override: How Gamergate (Nearly) Destroyed My Life, and How We Can Win The Fight Against Online Hate

Zoe Quinn was a video game developer when her ex-boyfriend posted a negative blog post in 2014 about her that sparked “Gamergate,” a sustained harassment campaign conducted against female developers and journalists that rocked video game culture to its core. Gamergate was a heated front on our broader culture war still being fought today across society. Quinn’s book discusses how Gamergate harmed her and how gaming culture can be better.

God In The Machine: Video Games as Spiritual Pursuit

“Free will vs. determinism, the importance of ritual, transcendence through mastery, notions of the self, justice and sin, life, death, and resurrection—these all come into play in the video games that some critics so easily write off as mind-numbing wastes of time.”

Author Liel Liebowitz creates a staggering comparison between the storytelling power of video games and the great philosophers of our past in a book full of optimism about how gaming can enrich our lives. It isn’t a hard book to read, however! It’s a pretty easy thing for a book that tackles such big subjects.

The Big Questions About Gaming

How to Talk About Videogames

Author Ian Bogost writes that video games are “part art and part appliance, part tableau and part toaster.” That zany description is just a taste of this book’s dive into the fundamental difference between video games and other kinds of art. Bogost examines familiar games like Madden NFL, Mario Kart, and Ms. Pac Man as well as fads like Flappy Bird and FarmVille to sort out the reasonable and unreasonable ways we treat gaming experiences.

Gaming culture has slowly crept into the mainstream conversation over the seven years since Tom Bissell wrote this acclaimed book. That doesn’t mean it’s not worth your time, however, especially if you still look down on the medium or want to know why you should care about it at all. Bissell goes to great lengths in this pseudo-memoir to explain the appeal, artistic capabilities and unique qualities of video games that make them a worthy peer of traditional art forms.

Beyond Choices: The Design of Ethical Gameplay

And yet, as games become more and more popular, important questions must be asked. Video games are a uniquely interactive medium, and many of them ask players to make moral choices. The severity of the consequences can vary, but one thing doesn’t: the effects remain inside the game reality. With that in mind, Miguel Sicart argues in Beyond Choices that “games that engage players ethically enable us to explore and express our values through play.” The book is a fascinating look at both the moral education available in video games and the incredible responsibility that puts upon game designers.

Social science research on video games is relatively new, but this book by Rachel Kowert and Thorsten Quandt received praise even within the games industry. The Video Game Debate is broader than Beyond Choices; it seeks answers to gaming questions our American culture has grappled with for decades. Do video games make children violent? Are video games addicting? Do they help or impair cognitive performance? This book is like an open forum, with views from students, game developers, politicians and scholars expressed alongside independent research.