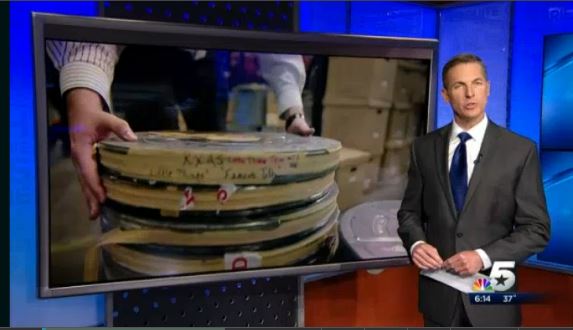 UNT Libraries house the complete news archive of NBC 5/KXAS (formerly WBAP), the oldest television news station in Texas. Most of the footage in the archive has not been seen since it originally aired, but a recent pilot project based at UNT makes news footage and scripts from five weeks in 1956 free to view online in the Portal to Texas History. Despite being small in scope, the pilot project demonstrates the rich historical content found in the NBC 5/KXAS Archive.

During the week of January 12 - 16, 2015, the NBC 5 News at 6 PM featured footage from the NBC 5/KXAS Television News Collection pilot project. Each night reporters highlighted a different aspect of life in North Texas in 1956.

Monday, January 12th: In a segment entitled “Big Things Ahead in DFW in 1956” DallasNews.com Digital Managing Editor Robert Wilonsky and NBC 5’s Brian Curtis demonstrated how the construction projects and concerns of 1956 shaped the north Texas we know today.

Tuesday, January 13th: The struggle for civil rights was underway in North Texas in 1956. With segregation in place, African-American families faced challenges integrating into schools and neighborhoods. In his “North Texas in Black and White in 1956” segment, NBC 5’s Eric King introduced viewers to Lloyd Austin, now 91 years old, who experienced extreme persecution when his family moved to an all-white neighborhood in Fort Worth.

Wednesday, January 14th: The year 1956 was one of the driest on record and Channel 5 filmed the results. Cooler temperatures brought rain but also severe weather. NBC 5 Chief Meteorologist David Finfrock shared the experiences of tornado victims and uncovered a town that no longer exists in “Covering Severe Storms in 1956.”

Thursday, January 15th: In “Fashion Forward in the 50s” NBC 5’s Ellen Bryan showed the influence history had on women’s clothing and how Dallas icon Neiman Marcus played an important role in 1950s fashion. Myra Walker, Professor and Texas Fashion Collection Director at the University of North Texas contributed to this report.

Friday, January 16th: “Eccentricities in North Texas” features a selection of human interest stories found in the NBC 5/KXAS archive, including a helicopter yo-yo, a rooster with horns, and a 38-year-old donut.

Access to the NBC 5/KXAS Archive is extremely limited due to the fragile condition of the film and video. We need your help to raise the funds necessary to clear, repair, and digitize this important piece of North Texas history. The first phase of the digitization project involves the oldest portion of the archive, all on 16 mm film, dating from 1950-1979. It costs approximately $7,500 to digitize and permanently preserve one month of film. Please consider a tax deductible gift today to assist us in meeting our goal.