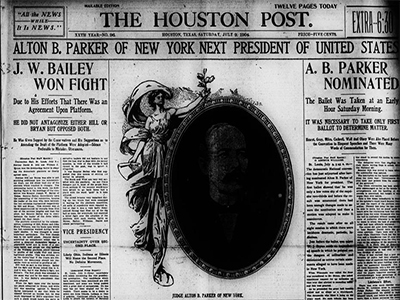 The Texas Digital Newspaper Program has added over 100,000 pages of the Houston Post

A great deal of fun in adding primary source content to The Portal to Texas History is that we get to research newspapers and learn about the concrete effects they had on the world of the past. Very recently, the Texas Digital Newspaper Program (TDNP) has added a significant portion of the Houston Post run to its collection. Ranging from 1903 to 1923 and containing over 100,000 pages, this new addition enables us to step into the shoes of the people who lived through and shaped history in Texas, the U.S., and even worldwide. In other words, like all newspapers, these pages make the past current for present-day readers. This addition of the Houston Post represents a succeeding title to the earlier content of the Houston Daily Post, which is another collection in the TDNP.

The Houston Daily Post formed in 1886, establishing itself as the premier paper in Houston, and one of the leading daily publications in Texas. The paper was led by future U.S. Senator Rienzi M. Johnston and business manager Julius L. Watson. Shortly after its formation the Houston Daily Post could claim a circulation of 6,000. By 1901, circulation had climbed to 14,207. The Daily Post maintained an $8.00 annual subscription rate.

One of Johnston’s most inspired actions was recruiting William Sydney Porter, whom you may know better as O. Henry. In 1895, soon after reading an issue of O. Henry’s short-lived weekly, the Rolling Stone, Johnston arranged to hire Porter for the Daily Post. O. Henry’s various writing assignments included witty daily editorial columns appearing under the banner of, first, “Tales of the Town,” then, “Postscripts and Pencillings,” and finally, “Some Postscripts.” These articles ranged from a half to a full column and were typically unsigned. His last column for the Daily Post appeared on June 22, 1896.

In September of 1900, the Houston Daily Post presented one of the most important Gulf Coast news stories of the early 20th century–the great Galveston Hurricane. Devastating one of the largest shipping ports in the world, the Galveston Hurricane was front page news for many issues of the daily Houston Post because Houston was the closest fully-operational city to cover the storm damage in Galveston. Articles in the Post about the hurricane began appearing shortly before it hit Galveston, with snippets on September 8th stating, “A tropical hurricane did damages on the Florida coast, driving two vessels ashore.” On September 10th, the Daily Post’s headline story announced, “THE FATE OF GALVESTON: ONE THOUSAND PERSONS DROWNED, KILLED, OR MISSING, IT IS ESTIMATED.” Throughout the month of September 1900, a common sight were lists of the dead showing the lives lost to the hurricane. As the September 11, 1900, issue states, “On the flotsam of bay and gulf are unidentified who reach the shore like seaweed floating on the ocean’s surface. Many have drifted out to the depths of the gulf to become prey for sharks and fishes. Others have floated to the shore, where, being unidentified they are consigned to mother earth from which they sprang without shroud or coffin or the customary burial rites. These are sad circumstances to chronicle, but they are true.”

By the end of September, the hurricane still appeared in the news, though less prominently: “Texas Politics—State. Much progress has been made in rehabilitating Galveston. Governor Sayers is highly commendatory of the work being done at Galveston and by the Houston relief committee.” Houston Daily Post reporters became witnesses to history, unknowingly memorializing the people of Galveston in the form of newspaper articles commemorating the plight and loss in their closest neighboring city. In surprising comparison, the city of Houston, according to the September 10th issue of the Post, suffered only one lost human life, despite a great deal of property damage.

In mid-1903 the newspaper changed its name to the Houston Post. By 1904, President McKinley had been assassinated and a new presidential election was front-page news. Alton B. Parker of New York was pitted against William Randolph Hearst for the Democratic Party nomination, winning in large part due to long years of service on the judicial bench combined with a closed-mouthed nature that seemed to indicate political neutrality. Endorsed by the Houston Post for the Democratic nomination, Alton Parker went on to lose to Theodore Roosevelt by a landslide in the general election. Despite such a tremendous loss, the two candidates showed good attitudes toward each other and the circumstances, according to the Houston Post: “President Roosevelt Did Not Expect to Receive the Large Majority Given Him,” and “Judge Parker Not Cast Down by Election Result. Congratulated President Roosevelt.” But time moved on.

The newspaper office also pioneered modern printing through early adoption of the Mergenthaler linotype machine, a machine that dramatically increased production in the news industry. Facing the threat of a strike by his employees, the newspaper’s business manager, J. L. Watson, replaced human typesetters with this linotype machine, becoming only the third newspaper publisher in the country to implement this technology. Once it proved successful, Mr. Watson himself went into business selling the Mergenthaler machine to other publishers across the country, making a fortune in the process. At their peak, there were over 12,000 of the Mergenthaler linotype machines in use, making it an industry standard set by the Houston Post. You can learn more about these machines when you read “The Linotype’s Birthday,” from the April 18, 1911, issue of the Houston Post.

The sinking of the steamship, the Lusitania, on May 7, 1915, represented a significant turn of events surrounding the Great War, or what we now refer to as World War I. In Houston, aside from the Associated Press announcements, the Post reported on prominent Texans who had sailed on the Lusitania, as well as on the loss to local industry: “Consignment for the Texas Bag and Fibre Company,” in the form of 1,500,000 yards of burlap “worth $65,000” to the corporation. Although the United States did not enter the war for another two years, the sinking of the Lusitania turned public opinion against Germany.

And because everything old becomes new again, the June 24, 1923 issue of the Houston Post reprints O. Henry’s column from 1898, to celebrate the twenty-fifth anniversary of his work at the Houston Daily Post.

It’s very easy for us to read history books or to watch television documentaries, but they don’t resonate in the same way as newspapers. It is a completely different feeling to read first-hand, eyewitness accounts of events, to feel what those people went through as they watched history taking place. This feeling is something our students understand, and it is something researchers act on to better grasp how events shape the course of history. In the Texas Digital Newspaper Program we are constantly adding newspapers from any date in time to the Portal. Because we plan for newspapers to be freely accessible in the long term, it’s fun to imagine how future readers might use more recent issues to understand how we live now!