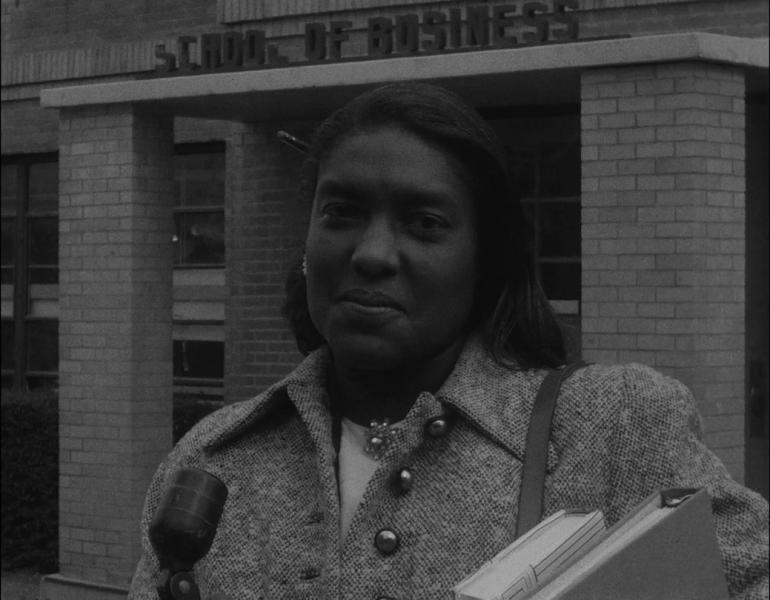 Newly discovered film in the NBC 5/KXAS Television News Collection has revealed footage of Irma E.L. Sephas, the first African-American undergraduate student at the University of North Texas attending classes on February 9, 1956. Prior to the discovery of this footage there was no known image of Sephas or of this historic time on campus.

University administration feared that Sephas would face riots or violence on campus similar to events unfolding at University of Alabama. However, as seen on this footage, her first days at UNT passed peacefully, with Sephus saying on film, “I am happy to be a student of the campus of good old North Texas that exemplifies the true Texas spirit, because certainly every hour I have spent here has been a pleasant one.” (Sound on film begins at 00:00:37.)

The footage captured here belies the turmoil which at times surrounded desegregation at UNT. It is known from later interviews that times President J.C. Matthews dispatched crews to campus in the early morning hours to erase racial epithets which had been chalked on sidewalks and to extinguish a burning cross on the lawn of the Administrative Building.

This footage was found within the NBC 5/KXAS Television News Collection which was donated to UNT Libraries in 2013. The archive contains historic broadcast footage, scripts, advertisements, still photography and research files dating from 1950 through 2012. Film and video in the archive remain in its original physical format, in this case 16mm film. UNT Special Collections staff worked with Laura Treat, Film and Media Preservation Librarian, to digitize this film in honor of the university’s 125 anniversary.

View the original broadcast script for this footage

Learn more about desegregation at UNT