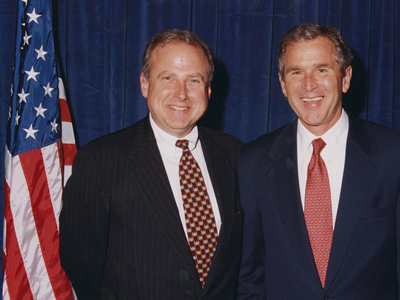 Posted: 07/07/2015
Special Collections
In the News Did You Know Collection Highlight

The year was 2000, and a personal friend of then-Texas Gov. George W. Bush – Charles C. Francis – was breaking a barrier for gay-rights advocates by holding a meeting with the governor and 11 other gay Republican men and women. It was the first time a Republican presidential candidate had ever formally and publicly met with a group of openly gay and lesbian individuals. On the agenda for the group known as the “Austin 12”: a frank conversation about gay and lesbian issues, sharing personal stories as gay and lesbian Republicans and a discussion about Bush’s presidential candidacy.

Now – nearly 15 years to the date of that meeting on April 13, 2000 – Francis has donated his entire collection of materials from that historic meeting of the “Austin 12” to the University of North Texas Libraries.

The Charles C. Francis collection contains documentation of the meeting, internal materials and memos from the Republican Unity Coalition. Started by Francis after the Austin 12 meeting, the coalition is a gay and straight advocacy group and political action committee dedicated to making sexual orientation a non-issue within the Republican Party.

Additionally, the UNT libraries will receive correspondence between Francis and prominent Republicans such as President George W. Bush, Sen. Alan K. Simpson, President Gerald R. Ford and Mary Cheney, as well as materials detailing press coverage that documents the struggle of gay Republicans to influence the direction of the GOP within their party.