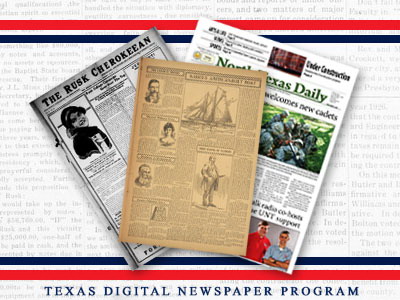 If you walk up to Dr. Andrew Torget at the University of North Texas and Dr. Caleb McDaniel at Rice University, ask them what they think of newspapers. These professors will start to talk to you about how they look at 19th-century newspaper issues over a series of years and use them as records for reading voting patterns or for learning about slavery in Texas. Torget, McDaniel, and their students have collaborated on extensive research on newspapers available in the Texas Digital Newspaper Program to build the Texas Runaway Ads (@TxRunawayAds) Twitter feed—displaying actual runaway slave advertisements that appeared in newspapers published between 1836 and 1860 such as the Telegraph and Texas Register, the Austin State Gazette, and the Clarksville Northern Standard. According to Torget, his UNT graduate students selected these specific titles because, “They represented the three main geographies of 1850s Texas—a southeast newspaper, a northeast newspaper, and a western paper.” Those geographical regions were centers of agricultural commerce in Texas during the mid-19th century, and their newspapers are some of the earliest available in the Texas Digital Newspaper Program.

This collaborative project has had significant impacts for the students working with both Torget and McDaniel, particularly in terms of how the students are able to communicate across institutions to better understand the historical period. For example, one of the most interesting and surprising finds within the Texas Runaway Ads was an ad placed by William Marsh Rice, the founder of Rice University. According to McDaniel, “It’s a very rare, important glimpse into Rice’s relationship to slavery, especially since it names the enslaved woman, Merinda, who escaped from him.” The importance of collaboration was strongly evinced by the appearance of this advertisement: it was originally located by UNT graduate students, who were then able to notify their Rice counterparts. The Rice graduate students then contextualized its significance within the wider framework of Texas history during the 19th century. This type of primary source research gives students a first-hand account of events, thus allowing them to read from multiple perspectives of people in history:

“Unfortunately, the primary sources on slavery in the United States are limited. These sources are usually written from the perspective of the slaveholder and often reduce slaves to their monetary value. This can make it difficult for historians to learn about the personal experiences, attitudes, and relationships of enslaved men and women. Among these primary sources, runaway advertisements offer one of the best glimpses into the names, personalities, and experiences of individual slaves, as well as into the institution of slavery as a whole” (http://ricedh.github.io/05-twitterbot.html).

The Runaway Slave Ads project goes one step further by displaying the text from ads on current social media, Twitter (https://twitter.com/TxRunawayAds). According to Dr. McDaniel, “We decided that placing the ads in social media streams, rather than on websites with standalone images of the ads, would more closely resemble the context in which they originally appeared—surrounded by other ads and quotidian news content.” During the 19th-century, and well into the 20th-century, newspapers were the social media of the day. Commonplace were ads about who visited whom in which town, who was recovering from what illness, and even who had run away from a slaveholder. According to Dr. Torget, “The idea of exploring and mapping these ads through digital means seemed to open the door to new insights into what runaway slave ads might be able to tell us about both Texas and slavery during the years before the Civil War.” The Texas Runaway Ads, in aggregate, is intended to help current researchers connect the names of people who were slaves with their geographic locations and, sometimes, family members.

These ads are already opening channels of communication across the history discipline to broaden our understanding of the 19th-century before the Civil War, as Seth Rockman, Professor of History at Brown University, states on his Twitter feed. A similar project by Kyle Ainsworth out of Stephen F. Austin University is the Texas Runaway Slave Project. Intended to document the names of individual runaway slaves, this project also uses newspapers from the Texas Digital Newspaper Program with the goal of providing identity to those people about whom little primary source evidence exists.

The Texas Runaway Ads and the Runaway Slave Project utilize open source technology intended to help people in the research community use digital tools to aggregate significant historical information in one place. This type of aggregation builds awareness of life in the past, provides faculty researchers with a platform for developing classroom materials, and gives students the opportunity to trace individuals across different ad postings, geographic locations, and activities. For example, the Texas Runaway Ads Twitter feed displays the runaway ads, one per tweet, and includes a link back to the original newspaper from which the individual ad originates. Any users of the feed can then use the aggregation of the ads via the feed to trace specific names, counties, or dates, but can also directly link to the newspaper page to get a rich context of an individual case.

The Texas Digital Newspaper Program is dedicated to supporting any kind of research. The work that Drs. Torget and McDaniel and their students are doing exemplifies how digital humanities research can broaden our vision into the past and can open new communication pathways across research disciplines.