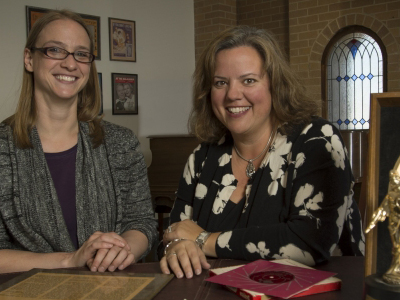 When she was a child, Jennifer Barnes just thought her parents had really cool friends.

Now, the assistant professor of jazz studies realizes her dad was part of something bigger – something she has the opportunity to share with UNT students.

That “something” is memorabilia from her father’s friend, Gene Puerling. Growing up, Barnes knew he was a smart guy with a witty sense of humor who sang and wrote arrangements for the vocal group in which they both sang. But, now she knows that Puerling was also a musical genius, a Grammy-award winning vocal arranger who was completely self-taught.

Barnes’ father was part of two musical groups led by Puerling, The Hi-Lo’s and The Singers Unlimited.

“They recorded their albums in Germany so our whole family went there,” Barnes remembered. “I was a kid so I didn’t really know the significance of what was happening musically. Turns out, there was amazing music going on.”

Puerling wrote intricate, harmonically complex arrangements in his pieces for The Hi-Lo’s! and The Singers Unlimited. His work influenced countless future vocal groups, including The Beach Boys, The Manhattan Transfer, The Real Group and Take 6. Yet, he was not a formally trained musician.

“He wasn’t trained to write music at the complexity level that he did,” Barnes noted. “He was writing completely by ear the kind of compositions that normally took people years and years of study to achieve. Other musicians I’ve talked to have trouble believing it.”

Puerling’s widow, Helen, confirmed to Barnes that he could tap out, note by note, a song on the piano. He started his ritual by sitting down with a ham sandwich, then he’d begin to write.

After his death in 2008, many universities and musicians wanted access to Puerling’s archives. However, it was the relationship with Barnes’ family and knowing that Puerling’s compositions and memorabilia will help the next generation of vocalists that piqued the interest of Helen Puerling. She was further encouraged to donate the collection to UNT because of the College of Music’s solid reputation and the fact that the Music Library has special collections of jazz legends Stan Kenton and Maynard Ferguson.

The learn more, see the InHouse article From family friend to self-taught legend.