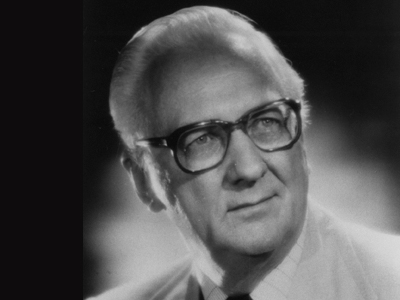 If you are a fan, alumnus, or alumna of the UNT Jazz Studies program, you owe a great debt of gratitude to Gene Hall, who laid the theoretical groundwork for and led the first degree program in jazz studies, though it was called “Dance Band” at the time.

Born in Whitewright, Texas, on June 12, 1913, Morris Eugene Hall started his musical studies as a preteen on a C-melody saxophone, which his father later traded for an alto saxophone as Hall became more involved in local ensembles. The difficulty of finding work during the Great Depression made continuing as a musician an economic necessity; Hall’s band, The Joy Makers, found their first regular engagement near Sherman, TX, as he continued to do farm work and other odd jobs during the day.

After a stint with the Civilian Conservation Corps, Hall joined a band based in Denison, TX at the prospect of making $10 a week performing in Missouri (though the actual amount was less). Hall returned to Texas in 1933, and in early 1934, he and members of his prior band sought work in Denton, expecting good prospects for a dance band in a college town. He explained in 1991:

“We had a house over there on Normal Street … Somehow or other I managed to save $18, and Bill Collins and I decided to go to school over here. Maybe we could do something. I paid my $18, but tuition was $36, so I painted the inside of the president’s house for the other $18 to finish off my tuition.”

A lack of funds forced Hall to drop out after a few months, and he joined a band in the Austin, TX area. That band, the Grand North American Orchestra, undertook a European tour. An initial setback in Spain turned into a three-month period of work, but the outbreak of wars and civil unrest thwarted the band’s plan to continue on to Italy and Egypt. The band returned in 1935, and Hall hitchhiked home to Whitewright from New Orleans, working in a grocery store until the middle of 1936.

Bill Collins then invited Hall to join Floyd Graham’s band at North Texas, which made as much in a Saturday gig as Hall did in a week at the store. He moved his family to Denton, though they still struggled to make ends meet as he studied at North Texas, and played and arranged music for Graham’s band.

Hall finished a Bachelor’s degree with a dual major in music and education in 1941. Expecting to be drafted at any time, he began work on his master’s degree at North Texas. He explained:

“… I come back to North Texas, and [Wilfred] Bain gives me a graduate assistantship. I have three chores. One of them seems ridiculous now. One of the things I had to do was patrol the practice room area at certain times to be sure no one was practicing or playing jazz or popular music.”

When Hall approached Bain to propose a thesis topic, Bain told him he already had one picked out for him: to write a method book for teaching jazz on the college level. Hall finished his thesis in 1944, while working variously as a band director, a touring musician, and a shoe salesman. In 1944, he replaced Don Gillis as staff arranger at the radio station WBAP.

In 1947, just as he was about to move to New York to begin doctoral studies and work with Don Gillis, Bain’s successor as dean of the School of Music, Walter Hodgson, offered Hall a job at North Texas. Hall obtained approval from the curriculum committee for a “dance band” program “because jazz was such a negative term in those days … It wasn’t until the 1960s that Leon [Breeden] was able to get it changed to ‘jazz’.”

The decision was controversial, and Hall did not sell his house in Fort Worth and move to Denton until Dean Hodgson told an assembly of the music students and faculty that his decision was final. Hall recalled:

”[Hodgson] got up and made a speech about the responsibilities of a state institution to the people who paid the taxes in returning to the community people qualified to deal with various areas. In our case, music.”

The program continued to face considerable and often intensely personal opposition from the outside, as one self-styled expert wrote to Hall:

“It seemed that you were very proud of the fact that yours was the only music Dept. in the U.S. teaching Jazz music (or can it be called music?)Thank the Lord that yours is the only place. I should think that the efforts of the School could be put to a much more constructive use . I also wonder if the tax payers are paying the bill for this kind of drivel or if supported by individuals what type of persons they can be to finance such a zaney program.”

But Hall persevered at North Texas, and also received his doctorate in education from New York University in 1954. He went on to found a similar program at Michigan State University in 1959, as the North Texas program was quickly gaining a national reputation. He went on to chair the music department at the College of the Desert in California, and later served on the faculty of Stephen F. Austin State University in Nacogdoches, TX. He was also the first president of the National Association of Jazz Educators, and was awarded their Hall of Fame trophy in 1981.

Hall died in Denton on March 4, 1993, leaving behind an incalculable legacy in jazz and in music education. The UNT Music Library has had the privilege of organizing and preserving a considerable portion of his papers and memorabilia in the Gene Hall Collection.