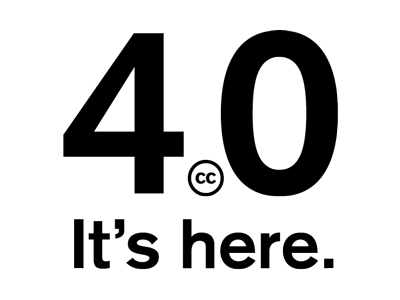 Creative Commons (CC) released their 4.0 versions of licenses on November 26, 2013. CC initially planned this release for December of 2012, but better late than never. CC still offers its six basic licenses (CC BY, CC BY-SA, CC BY-ND, CC BY-NC, CC BY-NC-SA, and CC BY-NC-ND), which look the same; and CC also offers its CC0 tool for public domain use. However, CC updated each license to improve its usability; address other non-copyright issues such as sui generis, privacy, publicity, and moral rights; simplify attribution; allow for licensor disassociation; provide opportunities to cure a breach; and to offer user-friendly lingo.

The CC 4.0 licenses improve the usability by offering more portability. This means each license is now interpreted based on standards of international treaties rather than being established around just one country’s copyright laws. Thus, the 4.0 group of licenses should be more usable and interpretable for denizens of numerous countries.

The CC 4.0 suite of licenses also directly addresses other rights outside of copyrights such as sui generis. Sui generis database rights grant qualifying database creators a right to prohibit the extraction and reuse of a substantial portion of a database. Sui generis rights are granted to database makers who spend a substantial investment of time and resources in generating a database. Sui generis rights are not as common in the United States as they are in Europe. The CC 4.0 licenses offer original creators the option to allow subsequent users the right to use portions of created databases, and the CC 4.0 licenses explicitly describe how such material may be used while still protecting any reserved sui generis rights. Past versions such as the 3.0 licenses did not directly address sui generis rights. The 4.0 suite of licenses also explicitly waves moral, publicity, and privacy rights for creators. Moral rights are understood differently in varying countries, however, in general they include a right to have works published anonymously or pseudonymously and a right to avoid derogatory treatment of their work (such as mutilation).

The CC 4.0 licenses also simplify the attribution requirement in all licenses. With the new suite of licenses a link to a separate page for attribution information will suffice. With past versions of CC licenses, licensees often encountered confusion as to whether they had to include the creator’s name, the title of the work, a link… all on their derivative of an original work. The new 4.0 CC licenses remove the guesswork and allow a licensee to satisfy the attribution requirement by simply linking to a page with clear attributing information.

Refusal of name and likeness

Permitting a cure for breaches

Most legal contracts allow thirty days or more as explicitly stated in a contract for a breaching party (a party who makes a mistake per contract terms) to cure the breach (to fix their mistake). The 4.0 CC licenses now allow thirty days for a breaching licensee to cure a breach. So, technically, with the 4.0 CC licenses, they effectively terminate at the time a licensee commits a breach. However, if a licensee corrects the breach within 30 days of discovering the breach, the CC license is reinstated. Notice, there does not appear to be language that states “or should have noticed the breach” on the CC site. I assume a scenario will eventually arise where a breaching party discovers their breach months or longer (years?) after the breach occurred, and at that time the licensor may state that such a time period is too long to cure a breach. Most contracts state “a breaching party has 30 days to cure after discovering a breach, or when they should have reasonably discovered the breach” to prevent perpetual curing of breaches. No such “reasonable discovery” language is found in the new CC suite of licenses.

Offering clear language, and offering a fix to bypassing the NC mandate

A common complaint I often hear about the 3.0 licenses is that the human readable layer still is not cogent. Therefore, this latest version of CC licenses attempts to provide better laymen’s terms in the language of the actual license (human readable layer) so that the terms of the license are understandable. This version also fixes the question of repetitive downstream adaptations of the original CC-BY-NC. Now, for any CC-BY-NC licensed item that is subject to repetitive adaptations, each rendition of the item must also contain the NC portion in the license.

Fair use greater in Israel than the United States?

Related to a matter separate from CC, in light of the oral argument that took place in the Eleventh Circuit of the United States Court of Appeals a couple of week ago, mentioning a case in a Jerusalem District Court decided on November 28th seem apropos. In this case, the district court approved a settlement between Hebrew University and two separate publishers. In the terms of the settlement it is stated that publishers have recognized as fair use the inclusion of digital excerpts from books and full articles in e-reserves systems, provided that access is limited only to students that are registered in the particular course using an ID number and a password. Sound familiar? Hebrew University and the publishers in this case agreed that use of such content establishes fair use and does not require permission from publishers or payment. Additionally, the publishers and Hebrew University agreed that the production of course packs containing excerpts from books and articles (as long as the course packs are produced on demand, sold at cost, and only to students enrolled in the course, academic staff, and academic administration) also constitutes fair use. Further, this agreement states the academic utilization of entire articles or 20% of books is deemed fair use. It must be noted that per this judicial settlement, both parties have agreed to revisit this agreement in 2017.

This is a remarkable accomplishment for fair use in Israel. Hopefully, the justices on the Eleventh Circuit take note of this because they seemed to be convinced by publishers in the recently argued Georgia State appeal that course packs were not fair use, and that excerpts of or full-text items placed on e-reserve were not fair use and equated to a course pack sold commercially.