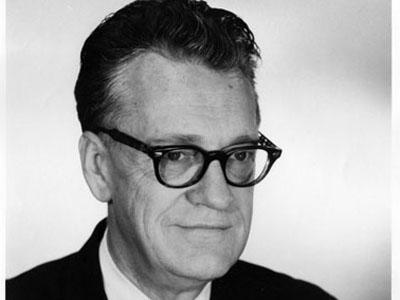 “Nothing has been left out of here except a brief mention of the spawning habits of the lamprey eel and a recipe for fried grits.” – Don Gillis, The Unfinished Symphony Conductor (1967)

The UNT Music Library celebrates the 100th birthday of Don Gillis, a musician, composer, educator, and producer, and UNT alumnus (MM, 1941) who had some impact on nearly every major institution of higher education in North Texas, including Texas Christian University, Southwestern Baptist Theological Seminary, Southern Methodist University, Dallas Baptist University, and the University of North Texas.

Gillis was born in Cameron, Missouri on June 17, 1912. After moving to Texas in 1930, he studied composition with Don Mixson at Texas Christian University, and then worked as a band director at TCU, during which time he also played trombone in the staff orchestra for the Fort Worth radio station WBAP, directed a symphony at Polytechnic Baptist Church in Fort Worth, taught at Southwestern Baptist Theological Seminary and Fort Worth Public Schools, and composed prolifically. Gillis’ early compositions established traits that endured throughout his career, with an emphasis on American and sacred themes, good-humored optimism, and the influence of American music, and particularly jazz.

The early 1940s were a period of rapid transition for Gillis, as he was awarded the first master’s degree in music composition at UNT (then North Texas State Teachers College) in 1941 for his Symphony No. 1: An American Symphony, and quickly moved from being Director of Productions at WBAP (1941-43) to being a producer for NBC Radio in Chicago (1943), and a producer and script writer for the NBC Symphony Orchestra, directed by Arturo Toscanini in New York City, a year later. Gillis’ Symphony 5 ½: A Symphony for Fun (1947), premiered by Arthur Fiedler with the Boston Pops, and was one of few American works performed by Toscanini, who pronounced Gillis’ name “Zhee-li.”

In 1965, Gillis discussed the genesis of that symphony, and his working relationship with Toscanini (Track 5). Later that year, he described Toscanini’s high praise for Symphony No. 5 ½ (Track 10):

He had decided to become a conductor instead of a composer, but he said, “you know, I didn’t have my ‘C-major chord’ like Beethoven. You can hear a Beethoven and immediately know it’s Beethoven … You have found your ‘C-major chord’.”

Upon Toscanini’s retirement in 1954, NBC disbanded its orchestra, but Gillis played a major role in reconstituting it as the Symphony of the Air, as president of its supervising organization, the Symphony Foundation of America. In its first season, Gillis accompanied the orchestra on a State Department-sponsored tour of Asia. After serving as the Sunday producer for NBC Radio’s Monitor program in 1955-56 and as vice president of the Interlochen Music Camp in Michigan from 1958 through 1961, Gillis produced the series Toscanini: The Man Behind the Legend for NBC radio, presented by announcer Ben Grauer, from 1963-1967, including a special series for the centennial of Toscanini’s birth.

Gillis returned to Texas and served as chair of the music department of Southern Methodist University in Dallas from 1967 to 1968, and as the chair of the arts department and director of instructional media at Dallas Baptist College from 1968 until 1973. While at DBC, Gillis assisted significantly with the UNT (then NTSU) Music Library’s acquisition of the WBAP radio orchestra’s sheet music collection.

In April of 1974, Gillis was honored as a distinguished NT alumnus, and in September of the same year, announced plans to donate his collection of scores, papers, tapes, and photos to the Music Library.

In 1973, Gillis took the position of Chair of the Institute of Media Arts at the University of South Carolina, where he remained until his death in 1978.

A century after his birth, Gillis leaves behind a twin legacy for music in America, through his own compositions, and through his work with Toscanini. The Music Library is pleased to maintain his collection for the continued use of scholars and musicians.