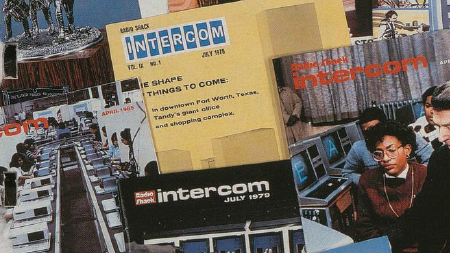 The University of North Texas Special Collections has completed a major digitization project to add the RadioShack corporate newsletter, “Intercom,” to The Portal to Texas History. UNT acquired the RadioShack and Tandy Corporation Archive through the 2017 bankruptcy auction of the RadioShack Company. The “Intercom” newsletter was selected for digitization based upon its rarity (no other institutional holdings exist) and historical significance in documenting the history of technology and computing in north Texas. You can now browse and search 206 issues of “Intercom” online.

“Intercom,” was published and distributed to RadioShack employees “between 1963 and 1986. A typical issue includes general news about “employees around the world, awards, information about new products and “events. The newsletter is an important resource for understanding the “history of the 52 years during which the Tandy Corporation operated “RadioShack Stores and manufacturing centers around the world.

Radio Shack found success by taking a vertically integrated approach to the company’s structure, with many of the store’s products being produced by the company itself. By 1974 one-third of products being sold at RadioShack stores in the US, Canada, Europe, and Australia were manufactured by the Tandy Corporation. The Realistic Supertape manufacturing facility in Fort Worth was responsible for producing magnetic tape used for audio recording and computer applications which were sold in RadioShack stores. These tapes were a direct competitor to more established tape brands such as BASF and Maxell.

In 1978, RadioShack moved into the personal computing marketplace during the first public showing of it’s low-cost personal computer, the TRS-80, in New York City. During this event, attendees were surprised and impressed to see a woman at the door typing the names and contact information of the attendees into a computer instead of a traditional guestbook. The TRS-80 was unique at the time due to its relatively low cost ($600) and the fact that it came fully assembled. Many personal computers at the time came in kits that required assembly at home.

”Intercom” is now available to the public through The Portal to Texas ”History. Some of the interesting articles include: