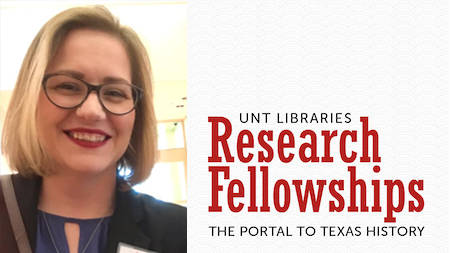 Thanks to twenty-first century digitization efforts, this project uses Denton County as a case study to challenge the longstanding notion that freedpeople in the South did not own land during the post-Reconstruction era. Analyzing freedpeople’s land-based economic activity in North Texas leads to many more questions, including what happened to their land, and to what extent is there a possibility that the government’s usage of eminent domain for Lakes Lewisville, Grapevine, and Ray Roberts was a tool of systemic racism that dismantled freedpeople’s communities? This project will utilize digitized collections from many of The Portal’s partners to address many of these inquiries, including: recovering as many names and lineages as possible of Black landowners in the county; quantifying and qualifying the extent of their ability to define freedom on their own terms; and reconstructing the geography of late eighteenth-century Denton County (pre-lakes) as best as possible.

Chelsea Stallings is a PhD student at Texas Christian University. Her research interests include African American and racial injustice studies, Reconstruction and post-Reconstruction histories, and U.S. New South and Jim Crow studies. Her doctoral research focuses on white supremacist efforts in North Texas during the critical decades between Reconstruction and the rise of the early twentieth-century KKK. She serves as an advisory member for Texas Woman’s University’s ‘Quakertown Stories’ initiative, and her research builds upon her master’s thesis, which historicized the forced removal of a North Texas freedmen’s community called Quakertown.