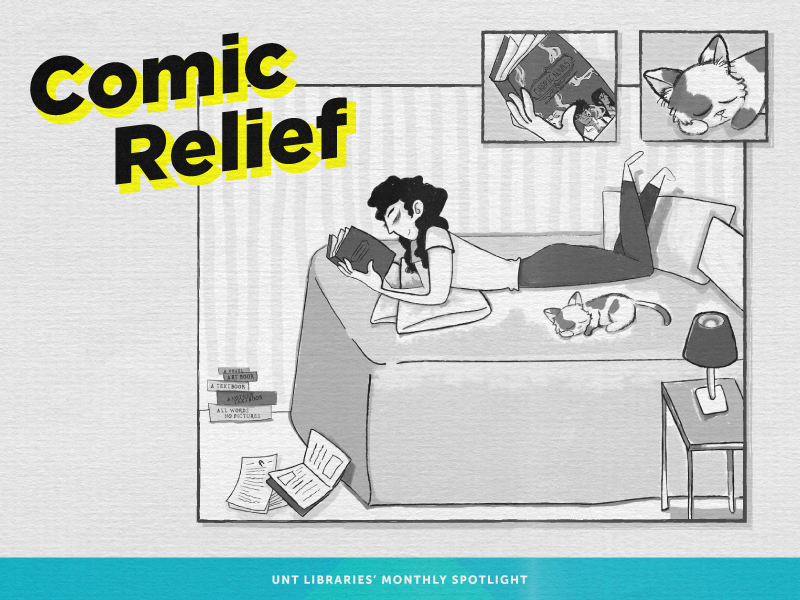 It’s been a few weeks since “Avengers: Infinity War” hit theaters and you’ve either seen it five times or wish your friends would stop talking about it. That’s it. Those are the two kinds of people out there.

We get it! Comic book movies aren’t for everyone. But the neat thing is that graphic novels, of which UNT Libraries is overflowing in, are for everyone. At the very least, the sheer variety of graphic novels on the Willis Library shelves ensures every student will find some colorful story to latch onto.

Since May is usually the day Marvel takes over our pop culture lives with Free Comic Book Day and one or two major superhero films, we at UNT Libraries decided to let our dear visitors know just how many graphic novels we have available. Because we have a lot. From hidden gems to legendary series, there’s something in there that anyone can get lost in. We can’t think of a better way to unwind after the spring semester!

But first, we have a debate to settle.

What’s the difference between graphic novels and comic books?

An important question! Because it kind of seems like “comic books” is a derogatory term sometimes, right? Many of our patrons have experienced this particular conversation:

You: “Have you ever read [insert graphic novel title here]?”

Former loved one: “Uh, no. Comic books are for kids.”

Heartbreaking stuff, right? Comic books are not graphic novels. The two have always occupied different mediums with occasional line-blurring. But here’s a general difference: comic books are short, serialized stories told over a number of issues and a long period of time. Graphic novels are longer stories, with a clear beginning and end, more complex plots and one or two issues.

Now, onto the graphic novels!

Yellow Rose of Texas: The Myth of Emily Morgan

You know the tune if you grew up in the Lone Star State, but do you know about the woman at the heart of the myth behind the song? This graphic novel examines the myth-making African-American folk heroine, Emily Morgan, who allegedly aided the Texas revolutionaries at the Battle of San Jacinto.

The Vietnam War: A Graphic History

Ken Burns’ The Vietnam War docuseries was phenomenal when it debuted in 2017, but there’s no doubt a Ken Burns documentary series requires a time commitment. A Graphic History, on the other hand, gives you the best of both worlds: visual depictions of how the war played out in Vietnam and in the United States and a book you can read at your own leisure.

Amelia Earhart: Free in the Skies

Unfortunately one of the greatest American pilots of her time is best-known for her disappearance and not her record-breaking career beforehand. This graphic novel by Robert Burleigh and Bill Wylie serves as a biography of one of the most famous women in modern world history.

For Fans of the Fantastical

Science fiction has consistently found a home on the pages of graphic novels over the years. From giant men to alien life, here are a few reality-bending stories that have caught our eye.

3 Story: The Secret History of the Giant Man

The life of Craig Pressgang, the titular giant man with an unruly growth hormone, is told by three women he grew close to as his increasing size left him isolated from the world he was out-growing.

The Japanese manga that inspired one of the greatest animated science fiction films of all time is ready to check out today. The plot about two paranormally-gifted teenagers fleeing agents in a futuristic and post-apocalyptic Tokyo almost single-handedly made mange popular outside of Japan when it debuted in 1982.

Take the tale of Peter Pan, place it in a modern setting from Wendy’s perspective and use it to tell a story of grief, family, and mental health and you get The Wendy Project. The official synopsis is intriguing, stating, “16-year-old Wendy Davies crashes her car into a lake on a late summer night in New England with her two younger brothers in the backseat. When she wakes up in the hospital, she is told that her youngest brother, Michael, is dead but she insists he is alive and in the custody of a mysterious flying boy.”

We’re halfway through this Spotlight so this is as good a time as any to mention that oh, yes, we have plenty of Marvel and D.C. comics and graphic novels for you to enjoy. And most of them have recent movie adaptations that relate directly to them! Waiting impatiently for Deadpool 2 in a few weeks? Embrace more Wade Wilson wackiness with Deadpool Kills the Marvel Universe. Yes, your favorite wise-cracking, fourth-wall-breaking superhero actually assassinated all of your favorite Marvel heroes in 2012. The whole story is weirdly awesome.

Speaking of, most of the big names – Spider-Man, The Avengers, Captain America, Hulk, Iron Man, Thor – from the Marvel Cinematic Universe sit on our bookshelves waiting to be checked out.

Biographies are stapled to the top of nearly every end-of-year bestsellers list. No matter the era, people like reading about other people. The connections made through text can be made just as easily through the imagery of graphic novels. Let these samplings from UNT Libraries prove it to you.

This is an illuminating coming-of-age story of Satrapi’s childhood and adolescence in the midst of the tumultuous Iranian Revolution. Her memories, relayed here in black-and-white, are both cuttingly funny and heartbreaking as she traces her life from childhood to self-imposed exile as an adult.

My Degeneration: A Journey Through Parkinson’s

Dunlap-Shohl was diagnosed with Parkinson ‘s disease at the age of 48 and has been an advocate for awareness of the malady ever since. “My Degeneration” traces the author’s journey through depression, the disease symptoms, the medication and its side effects, the author’s interactions with family, and the mental and physical changes caused by the disease.

For A Fresh Take On An Old Favorite

A novel becomes a classic for a reason: it simply contains terrific storytelling. And if we’ve learned anything from human history it’s that great storytelling travels across mediums

So it’s no surprise a few legendary works of fiction have been reimagined as graphic novels over the last century. Here’s a handful available at UNT Libraries.

Adapted by Joeming Dunn and illustrated by Ben Dunn, this is an adaptation of H.G. Wells’ iconic novel about a scientist who achieves invisibility and falls prey to evil temptations.

While the film adaptation of one of Stephen King’s most famous works earned negative reviews last year, the comic series is generally well-received by critics and fans alike. That’s high marks for an adaptation of the magnum opus of one of America’s greatest authors.