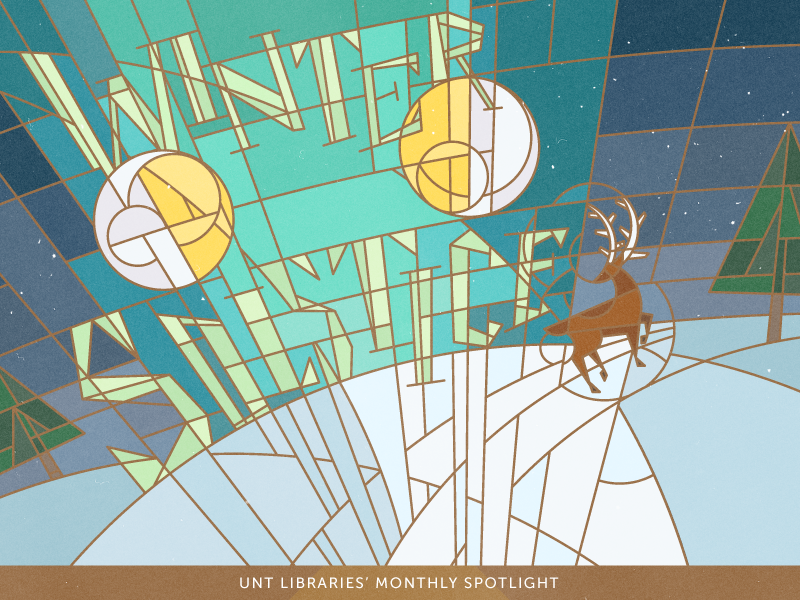 The winter solstice is right around the corner!

No, we had no idea what that meant either when we heard about it. We vaguely remembered it had something to do with a really long night. Besides that? Nothing.

So we set out to do some research and stumbled upon some interesting books and media in our very own UNT Libraries that you might be interested in. Oh, and when it actually happens this month. That seems important.

But first, let’s answer a simple question: What on Earth is the winter solstice?

It’s all about Earth, actually

It’s the one moment, every year when the Northern Hemisphere (hey, that’s us!) is tilted furthest away from the sun. Here’s how The Telegraph explains it:

The winter solstice happens every year when the Sun reaches its most southerly declination of -23.5 degrees. In other words, when the North Pole is tilted farthest – 23.5 degrees – away from the Sun, delivering the fewest hours of sunlight of the year.

The Sun is directly overhead of the Tropic of Capricorn in the Southern Hemisphere during the December solstice and is closer to the horizon than at any other time in the year, meaning shorter days and longer nights.

The winter solstice occurs around noon, at the exact moment that the sun rests over the Tropic of Capricorn, creating beautiful moments like the one in this photo.

In other words, you’ll know it’s happening when you see it.

So those are the facts. But what a rabbit hole we fell into as we looked those up. Turns out, the world’s cultures have celebrated this annual astronomical event for centuries in many different ways. We’re talking festivals. We’re talking large rocks. We’re talking circles of large rocks sitting in the middle of nowhere.

Here’s just a handful of topics we found interesting and the resources on them available to you, dear students, in the UNT Libraries.

The renowned ring of standing stones in Wiltshire, England, has fascinated archaeologists and tourists for centuries. We still don’t know who built Stonehenge almost 5,000 years ago, but we might know why: to celebrate the winter and summer solstices. Per StonehengeTours.com:

Your UNT Media Library has plenty of media exploring the origins of Stonehenge, including:

Stonehenge is obviously the more well-known of the two, but Newgrange is just as significant. The structure in Ireland is actually older than Stonehenge and marks the sunrise. You can read up on this lesser-known, but equally fascinating, place by checking out Robert Hensey’s book, First Light: The Origins of Newgrange in the UNT Libraries today.

Machu Picchu, the iconic ruins high in the Andes mountain range of Peru, was once the estate of an Incan emperor. It also holds a ritual stone known as Intihuatana important to the solstice.

At least one of the items in the UNT Libraries argues that this stone represents the intent of Machu Picchu as a whole. Besides that, there are plenty of items on the topic and the historic site itself available.

From China to Europe to South America, cultures throughout the world consider the solstice an important moment in their calendar years. Myths, stories, and celebrations have evolved around this annual moment for ages. In Celebrate the Solstice, Richard Heinberg recounts many of these. It’s available right now, just in time for your winter parties.