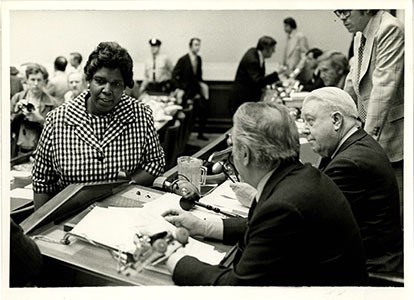 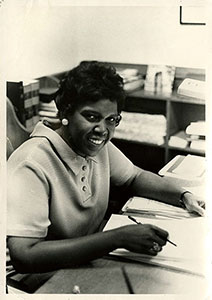 “I never wanted to be run-of-the-mill.” –Barbara Jordan1

Barbara Charline Jordan was born February 21, 1936 in Houston, Texas. She graduated from Texas Southern University with a degree in political science and later received her law degree from Boston University in

“Today we are not being petty, we are trying to be big because the task we have before us is a big one.”– From Jordan’s speech before the House Judiciary Committee, July 25, 1974.

Providing access to documents depicting the extensive and rich career of this American stateswoman has been no small task. In addition to photographs, The Portal to Texas History now contains materials from Jordan’s time in the Texas Senate, many of her speeches, and scrapbooks compiled from 1967 to 1980. The documents provide a behind-the-scenes look at Jordan’s drafting process including handwritten, teleprompter, and typed copies of her speeches. The collection has provided access to such famous compositions as “Civil Liberties: Inoperative? Inaudible? Unintelligible? Expletive Deleted?,” the speech given at Howard University’s Commencement on May 11, 1974 as she prepared for the Judicial Committee Hearing on the Impeachment of Richard Nixon; a draft of the famous Judiciary Committee Speech she gave on July 25, 1974, and her keynote address remarks at the Democratic National Convention in 1976. 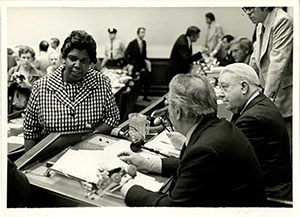 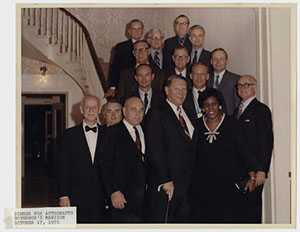 Inside each of the 37 scrapbooks are correspondence, newspaper clippings, and photos documenting Jordan’s statements, engagements, and accomplishments. Some examples include this article paying homage to the astronauts of the first lunar landing and the news feature “‘Black Rose’ of Texas Not Awed by Historic Role.” Viewers of this part of the collection will be able to get a sense of the culture and media representation of the late 1960’s and 70’s.

These materials were digitized with grant funding through a Rescuing Texas History mini-grant awarded by UNT in 2013 and another grant awarded by the Tocker Foundation in 2014.The digital Barbara C. Jordan Archives collection now includes nearly two thousand items and is expected to grow as further funding is secured. Efforts to acquire grants to digitize more material recording Jordan’s time in Congress, her correspondence, and photos are already under way. Meanwhile, digital collection visitors are encouraged to visit in person the physical items at Texas Southern University’s Special Collections.